Today I took the HR Jones Tank up to Carlisle to CD0GG’s Running Day on their layout at the Citadel Station. You’ll remember that after the Running Day in December I decided that the Jones Tank had to have some modifications to enable it to run in club layout conditions, I'd carried out the alterations and had high expectations.

There was a good attendance at the Running Day including a strong presence from the Preston G0G Club who brought some interesting models along that I’d not seen before. The club room buzzed with conversation and there wasn’t a moment in the day when the layout wasn’t displaying the modelling skills of the Guild members or showing off the running qualities of a wide range of locomotives and rolling stock. It wasn’t until lunch time and the call of the chip shop thinned the attendance that my engine had a look in…by which time I thought the visitors had set a high standard for them to live up to.


Here’s the HR Jones Tank snaking smoothly through the pointwork past the sidings on the back section of the layout with a train carrying a 15 inch gun barrel for a Dreadnought which was built by Stephen Jarnell, one of the Preston members. She took everything in her stride, and though there were a couple of front bogie derailments, we soon sorted out the offending awkward spots on the track and she continued to run superbly on both the tighter inner as well as the outer circuit.

Heroes of the Footplate


Driver R17
The driver reaches for the regulator handle with his right hand while steadying his balance with his left on the splasher top while peering intently at the road ahead through the cab window.
Fireman R18
The fireman in casual pose seems little concerned with the antics of the driver. The cab will have a wooden floor at a later stage which accounts for the wooden spacer under the fireman’s feet which allows him to assume his pose with his arm over the cab beading.
The crew for a Jones Tank are available now in my "Heroes of the Footplate" range…ref: Driver R17 and fireman R18.
So if your Jones Tank, and I hope that there are a few out there, needs a crew… here’s the answer; in fact they could be the answer to crewing most tank engines, not just Jones Tanks! 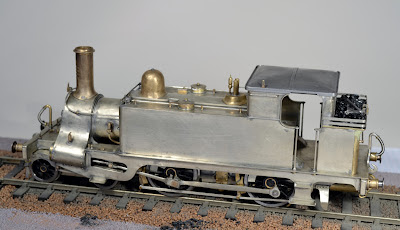 LMS 15011, ex HR 58 takes to the test track in Pete’s studio. There are six sets of points, a crossing and a 6ft curve to negotiate, which she did very well, though there are some rather disconcerting noises coming from inside that need investigating. I’ve made a start on the crew who are both well under way.

I’ve coaled the Jones Tank already as the coal supports the rather flimsy bunker coal rails, there’s an old bucket in there too, and a coal breaker too. Note how the coal rails form a central alcove to house the lamp bracket.

The name of Pete's new Blog is still petesworkshop but the address is now http://petesnewworkshop.blogspot.com/

The page headings on the banner above contain pictures of models that I hope will prove a useful reference for modellers who share my interest in the Highland Railway and the LNWR and who are building Skye Bogies, Wee Bens, Coal Tanks and Chopper Tanks and the like. My interest is modelling the "Steam Era" with the emphasis on pre-war days and earlier.
In addition for those with interests beyond railways there are pictures of Pete's military models from his earlier involvement with that area of modelling.
Blogger, our Blog support, now allows visitors to click on an image and enlarge it, a feature I've been keen to introduce for some time.


A Guide to Painting Figures.

Under the page heading "Painting Figures" you will find Pete's illustrated article, originally published in MRJ, dealing with all aspects of working with 1:43 scale railway figures.