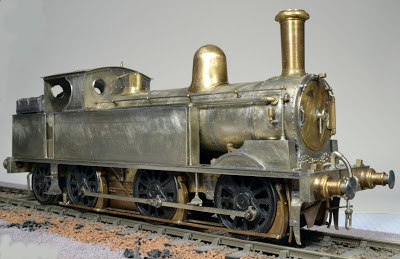 LNWR Coal Tank ready for the paint shop, she'll eventually be no.771 which was shedded at Workington.
Posted by Pete Armstrong at 13:57 1 comment:

I built a kind of Cleminson system, using parts from an Ambis etched fret... LWBOL-7 obtained from Hobby Holidays, which allows the axles to articulate and steer round curves, a six-wheel coach runs well with this arrangement. There's a lot of superfluous detail on the fret, which I discarded, to be left with just three axle carriers and a connecting spine to mount them on which in turn fastened to the Lochgorm Kits coach underframe. The centre axle carrier travels laterally across the underframe; the the outer ones are arranged to move on an end pivot. The rod that connects the carriers and co-ordinates their movement is fixed to the central carrier but only loosely attached to the outer ones to allow them to pivot.

The D9 coach is intended to pair, as part of a composite Highland Railway train, with my D19 all third coach... which you can see if you click on "Coaches" on the Home page. Ultimately, this pair, with a PBV and a selection of HR goods stock in tow, should make a fine sight behind my Skye Bogie or even the Wee Ben.

Posted by Pete Armstrong at 09:33 No comments:

There are brake-pull rods both inside and outside the wheels on a Coal Tank. In order to allow the wheels to be taken off the outer rods need to be removable. So, though I soldered the inner rods in place onto the transverse spacers, I screwed the outer ones on. I tapped the small diameter tubes, which act as spacers for the rods 16BA, there's one of these tubes attached to each brake block as well as to the brake rod operating arm behind the rear driver. The screws are 16BA cheese heads which I've rounded off to look something like the rivets used on the real thing. You can just see the rear sand pipe in front of the brake rod operating arm protruding between the paired rods. The brake rods were rather fine, only 2" wide, a mere 1.16mm in 7mm scale. I made them from 1.18mm half-round rod which makes them both robust and to scale. When they're drilled for the 16BA screws there's very little metal left which necessitates a washer over the hole for strength... I think I can see the same arrangement on a photo of the prototype.

Below the chassis, behind the operating arm, you can see part of the lever connecting the transverse brake shaft to the reversing mechanism mounted in the bunker above. The cut-out shape in the chassis behind the rear wheel is much in evidence in this picture but is masked by the cab step once the superstructure is in place.

The master pattern for the tool box was difficult to construct but is now finished and in a mould in the workshop. If you want some castings of this yourself there should be some available in a few days. The tool boxes stand on wooden blocks mounted on the bunker top, they protrude slightly beyond the bunker sides though they are held firmly in place by hooks which attach to the tool box handles.

I've been busy working on second version of the Coal Tank fireman in a less specific pose, so he's no longer "straddling" the works. This new character will be useful on almost any engine, he's also in a mould in the workshop at the moment and will be available very soon and will be featured on the Blog.

As construction of the Coal Tank is nearing completion I've been considering my next project. I've decided to step back into the realm of the Highland Railway and will be working on a D9 composite coach from a set of Lochgorm etches. I've spent some time working on the coach recently and will be making a posting on the progress I've made very soon...
Posted by Pete Armstrong at 14:58 No comments:

The name of Pete's new Blog is still petesworkshop but the address is now http://petesnewworkshop.blogspot.com/

The page headings on the banner above contain pictures of models that I hope will prove a useful reference for modellers who share my interest in the Highland Railway and the LNWR and who are building Skye Bogies, Wee Bens, Coal Tanks and Chopper Tanks and the like. My interest is modelling the "Steam Era" with the emphasis on pre-war days and earlier.
In addition for those with interests beyond railways there are pictures of Pete's military models from his earlier involvement with that area of modelling.
Blogger, our Blog support, now allows visitors to click on an image and enlarge it, a feature I've been keen to introduce for some time.


A Guide to Painting Figures.

Under the page heading "Painting Figures" you will find Pete's illustrated article, originally published in MRJ, dealing with all aspects of working with 1:43 scale railway figures.